Today is the day before the big race – my first half marathon and the furthest distance I’ve ever run in one day (although I came pretty close to it with a 11 mile run and a 2 mile hike on the same day).

I’ve been training for this since January when I had an operation on my knee which meant that my proposed half marathon on my birthday in March was not feasible. However, the Capcity Half Marathon in Columbus was the next best choice – a comparatively flat course, local and I’d have some other friends there.

Since Jan 10th – my first measured walk of .4 miles, after the operation I’ve run 169.97 miles and walked/hiked 30.73 miles.  They may not seem a lot for some of the more experienced and longer runners (and it’s less than I should have run on my training plan) , but it’s a long way for me and a great improvement to my health from last year.

Yesterdays run, the last one before the race was particularly tough – it was the shortest I’d run in a long time but also the hottest (75 degrees 4 hours after running so I’m not sure what it was at 6.30pm). It’s not much fun running in the heat and having luke warm water to drink. I’m hoping Saturdays weather will be a lot nicer although – its going to be between 55 and 79 at the moment. (Meanwhile in England it’s 42).

It was nice at the Expo this afternoon – outside in the shade was pleasant and it wasn’t too bad in the sun so hopefully tomorrow will be better.

As far as the expo was concern 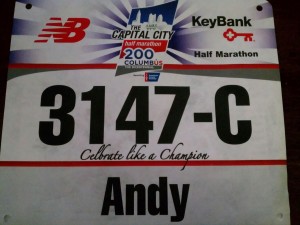 ed, I wasn’t very impressed. It was a lot smaller than the Columbus Marathon expo that I went to last year (when I wasn’t actually running) but I guess that is to be expected for a half marathon?  The line to pick up my race number was non existent and very fast, but then you had to walk down the other end of the hall to get the t-shirt which seemed a bit pointless.  The bib has my name on it and space on the back to fill out emergency information which seems like a good idea until you realise the timing chips are stuck over half of the writing and it’s very difficult to find a pen that will write on the shiny/rippled surface and I dread to think what the ink will be like after 2 hrs of sweat (he said with a very optimistic finishing time)

I was actually up pretty early this morning and it was pleasant outside in shorts so I’m not going to need my throwaway clothes tomorrow which is nice as the sweatshirt I got was actually pretty good.  Speaking of shirts, I picked up the race shirt and it fits nicely and also scored a free shirt from Ohio Health and a free 13.1 shubeez (button that goes on your shoelaces – that will go on after the race along with the 13.1 sticker on the car. I inquired about the minimum run for the shoebeez but it is 500 – way too many to get some done for the Turtles – mind you, some of the runners do have a lot of running shoes so would need way more than two……

Pasta tonight for the traditional carb loading (but the first time for me) and an early start – they recommend being downtown by 630am but if everyone else gets there then……  What time are you getting there for?

Hopefully I meet up with everyone at the race but no idea where yet – possibly at the CRC van?

The gps is on charge, phone on charge, water bottles in the freezer, swedish fish purchased, alarm clock set, ipod on charge, new tunes added to a Half marathon playlist and I think I’m set.

Good luck everyone – hope you get a good nights sleep, have been drinking water today and see you tomorrow!