Two weeks ago I saw my potential surgeon / specialist for a consult after getting an MRI and the combination of the MRI and xray images show that I have a stress fracture at the end of my femur. As I get confused with all the funky bone names, here is a helpful picture. You can also see the meniscus that I had repaired in December last year.

Due to the fracture he wants me on crutches for a while and to have a bone stimulator machine run to improve the bone growth. I’m also scheduled for followup appointments every 2 weeks.

Fortunately I still had the crutches from the Meniscus surgery last year, so for the past two weeks I’ve been using those and as a result my underarms and sides are getting really sore from the constant rubbing as I move around. So I’m really living the high life today and got some forearm crutches on ebay today. When I asked about these crutches the doctors assistant didn’t know what they were called, looked them up on her iphone and then got a prescription written for me but was not able to tell me where to get them from and warned that my insurance wouldn’t pay for them. So based on that, it seemed a lot easier to just get them from ebay. These are the same type of crutch that I had in the UK when I had my cancer surgery on my left leg and they were much better – I have no idea what I did with the UK ones although I think we gave them back to the hospital as they are just loaned to you rather than given to you. In the meantime it is strange that I’m getting excited about receiving crutches in the mail 😉 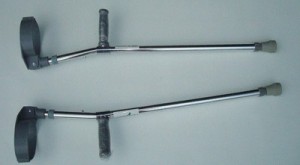 Last Thursday I also had an appointment to get my bone stim machine. It’s an Exogen Ultrasonic Bone Healing System as shown below (image from Exogen’s website)  and if it’s as good as they say it is, I’m hoping to have the stress fracture showing significant signs of healing (or complete) within 2-4 weeks.

It comes with a bean bag weighted strap that rests over the knee (kind of like a gps mount for the car dashboard) and the transducer fits in a hole in the strap and it then sends the ultrasonic waves down to the bone.

I’ve used it for two days so far, so it is too early to tell any difference but the process is very easy. Just lube up the transducer with a gob of goo, push the button and then fight Frankie off the knee. (He’s actually been pretty good and prefers sitting higher up on the leg anyway). You don’t feel it doing anything, just have to sit still for 20 minutes and then there is a ding from the timer, wipe off the goo and pack it up for the following day.  Apparently it stimulates the bone cells to repair for 30 hrs after use so just needs using once a day.

Unfortunately the machine is expensive and I’m waiting to hear about payment methods for it – I’ve not reached my deductible yet so theres a potential that I may have to pay for the whole thing up front but there’s a possibility I could get a better deal from their patient advocate department, so here’s hoping.  Having said that, the cost of physical therapy and Doctor visits means I’ll be hitting the deductible total pretty soon anyway at which point it won’t really matter but it’s still an expense.  But, once I’m done, if anyone wants to rent the equipment for $200 then let me know 😉

Also Wednesday was talk like a pirate day – I’ve perfected my peg leg impression but did get some funny looks from my coworkers when I spoke a few pirate phrases (although my pirate accent sounds a lot like my Devon farmer with a tractor impression).

Needless to say from all of the above I won’t be running for a while unless I’m crazy enough to do what this guy does….

4 thoughts on “Underarm crutches are painful and a new gadget – Bone Stimulator.”