[wprunkeeper activity=”81556890″] Last weekend I was able to take a long weekend off work and headed out to see my friends in Hookstown, PA – right in the middle of a whole load of hills. As the 15k is coming up (on Sunday) and the half marathon is coming up real soon, I hoped to get a long run during the weekend and to avoid being antisocial I set my alarm clock on the phone for 6.30 with the intention of being out of the house by 7am.

Unfortunately, electronics had other plans. I woke at 7am the next morning to find that my phone had decided to switch itself off overnight and therefore the alarm hadn’t gone off. Not only had it switched itself off, it had decided to not charge itself either, so there was only a little bit of battery left.  I left it charging whilst I grabbed some coffee and a banana before heading out the door.  I drove into Hookstown and parked “down town” and headed off up the first road that was appropriately named Hill Road. 10-15 minutes later the phone decided it was almost out of battery so I had to turn off the music and run the rest of the run with just my breathing and the sound of many barking dogs for company. The good thing with the battery dying is that I realised I hadn’t actually started the Garmin GPS going, so the stats for this run are actually a combination of Runkeeper’s stats for the first 1.5 miles and the Garmin for the rest of it.

Hill Road was appropriately named. Very pretty but very hilly. Lots of ups and down and very quiet – I saw about 2 cars all the way. At one point there was a guy using a JCB/Backhoe to pick up rubbish/trash into a lorry/dumper truck that was blocking the entire road.  Fortunately there was enough room to squeeze by, but I did feel sorry for the couple of drivers in their cars on the other side who had a long wait ahead of them.

After a while I ran down the hill and ended up in Georgetown. A tiny village with about 3 streets in it – probably even smaller than Hookstown.  In fact I wasn’t even sure if this was the town that I was meant to turn off Hill Rd as it didn’t feel like I had run far enough. I got the phone out, checked the gps and sure enough – this was the town.  The road I was meant to take had a different name on the signpost which had added to the confusion. In the end I ran through most of the town (which wasn’t difficult) and said Hi to a couple of people working in their garden who probably wondered where I had come from.

After leaving Georgetown the road back to Hookstown was pretty flat with a gentle , barely noticeable climb alongside a river bed.  There were tons of fishermen camped out along the river and the smell of a wood fire and breakfast smelt really good. I did wonder why they were fishing as the “river” was a tiny little stream and barely seemed large enough to support some minnows let alone fish.

Eventually I arrived back in Hookstown and was feeling really good – the previous night we’d driven down a lane that led to Little Blue Lake. Take a moment to go look at that overhead view of the lake – it really looks like something out of Cocoon or something.

the water is due to flyash dumping from the local powerstation – more information and details at Sorabji’s site. Despite knowing about the toxicity of what caused the lake, the road up to the lake was 1.75 miles long with some nice curves and rolling hills and would make a good addition to the run to bring me up to about 11 miles so off I went.  Enjoyed the run up but it was starting to get warm out – thankfully this road is so deserted there was little chance of any vehicles coming so I could run in the shade of the trees on the “wrong side” of the road.  After reaching the end of the road, I turned around and headed back into town.  On the way back I was pleased with the progress but not sure whether to do another loop – which would put me at half marathon distance – or call it a day. Due to the late start and no phone to call back home with an update I decided to call the 11.4 miles a day.  My feet and legs weren’t too tired so it was great to end on a high note, knowing that I shouldn’t have a problem with the 13.1 miles on May 5th. 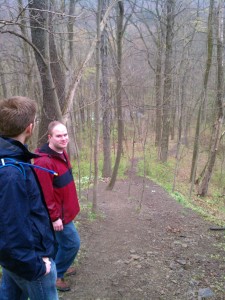 Later that afternoon we did go out for a short hike in Racoon Park – the first part was straight up a hill. (Photo to the left shows the view back down the hill on our way back).  I was tempted to do a bit of trail running when the ground leveled off a bit, but I really didn’t fancy tripping or twisting an ankle amongst the tree roots this close to the half so I restrained myself.  The combined distance of the walk and the run this morning *did* put me over the half marathon distance. This is probably the furthest I’ve ever walked/run in one day and I wasn’t feeling sore – just elated from all those endomorphins running through me.

Combined with spending 3 days with my friends and winning a game of Killer Bunnies – a GREAT weekend.

1 thought on “Double digits and a new state”