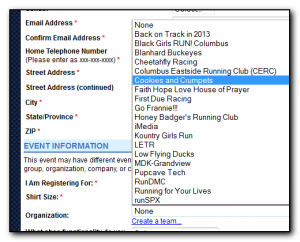 My leg is still hurting and I haven’t run since Aug 3rd and I’m due to see the doctor on Tuesday but it sounds like I might have meniscus problems on my left leg now. Either way it is still very painful to straighten and the outside ITBand is also painfule (but that could be the meniscus – lets hope so).

Therefore I’ve made the hard decision to pull out of the Columbus Marathon as there is no way I’d be able to run that distance after having surgery sometime in the next few weeks (I hope – the last wait was a month and way too long to hobble everywhere although this time the pain isn’t as bad as the right leg).

So – if you haven’t signed up for the Columbus Marathon yet and would like a discounted registration then please let me know – You pay less than the current $105 and I get some of my registration money back.  There is a $25 transfer fee that you as the recipient will pay to Columbus and then we can discuss a reasonable balance to keep us both happy 😉

Looking forward to this race and I’ve already booked my next race – the Dublin Irish Festival 5k run in August. The cool thing about this race is it runs right past my house. It’ll be weird running down the hill past my house and not stopping and hitting the Garmin.  The bad side to this race is that a lot of it is on a road that has no pavement (sidewalk) so it’s too dangerous to practise the route safely.  I do run about 1/3 of the race nearly every time I go out though, including The Hill  that I hate at the end of my usual runs, although I am finding it easier to run up it without stopping (but still have to sometimes!).

In the meantime I have the half next weekend and I’m volunteering for a couple of other local races which should be fun.